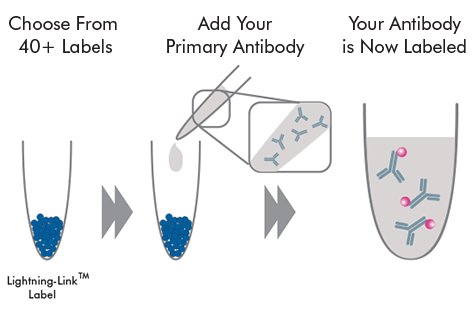 Any immunoassay in which antibodies are used for signal detection, from a Western Blot or an ELISA to an immunohistochemistry assay, will require the labeling of said antibodies with an enzyme, fluorescent stains or colored particles, among others.

The labeled antibodies can be primary or secondary depending on whether the immunoassay is direct or indirect. Although a wide variety of commercially labeled antibodies are currently available , it is sometimes necessary to label them directly in the laboratory.

In this post we bring you a compilation of the main methods of antibody labeling .

Antibodies contain a large number of reactive amine groups that allow them to be covalently labeled with molecules containing chemical groups capable of reacting with them.

Whichever method is used, there are some general considerations to keep in mind:

Now yes, here are the 5 methods of antibody labeling that are most frequently used in the research laboratory:

This method is used for the labeling of antibodies with different fluorochromes, and it is not necessary to make any previous modification on the antibody in question.

The binding of the label by chemical conjugation between the NHS ester and an amine group of the antibody occurs under physiological or alkaline conditions (pH 7.2-8) to achieve stable amide linkages.

The main drawback of this method is that the esters are relatively unstable sensitive due to their sensitivity to moisture. That is why the antibodies marked by this method should be used immediately after their preparation.

As in the previous one, this method is used for the labeling of antibodies with fluorochromes. In this case, the reaction has to be carried out at a pH equal to or greater than 9.8, which can degrade certain antibodies.

Isothiocyanate is more stable than NHS, but the procedure is more complex, and the yield of the reaction is usually lower in this case.

This method is used to label the antibodies with carboxylated particles.

Compounds derived from carbodiimide convert carboxyl groups into intermediate reagents capable of reacting with amines. The high reactivity of carbodiimides allows the labeling of antibodies with relatively inert materials such as magnetic particles, gold particles or latex.

This method is simple, but like the NHS these molecules are hygroscopic, so the antibody should be used immediately after labeling.

With this method, the antibodies are labeled with a molecule of a protein nature such as a catalyst enzyme (HRP, Alkaline Phosphatase, …). Since both molecules have numerous amino groups, a direct reaction between them would also result in polymers of each of them. Therefore, it is necessary to link in two separate steps, linking each of these ligands to a different tag, and subsequently making these two tags react with each other.

Although this method requires much more time and work than the NHS, the resulting labeled antibodies are much more stable.

It is used to generate antibody-HRP conjugates. The periodate activates HRP by creating aldehyde groups that interact with lysine residues.

Note that the binding between HRP and the antibody is reversible unless stabilized by the addition of sodium cyanoborohydride.

Meet us at AACC 2022 at booth #853 to talk to our technical experts and discuss how BBI Solution’s anti-CRP antibody can be used in your assay.
Schedule a meeting with our team today: https://bit.ly/3RM2h0Q
#AACC #inflammation