Comparison of Meiosis and Mitosis 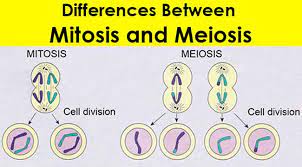 Organisms grow and reproduce through cell division. In eukaryotic cells, the production of new cells occurs as a result of mitosis and meiosis. These two nuclear division processes are similar but distinct. Both processes involve the division of a diploid cell or a cell that contains two sets of chromosomes (one chromosome donated by each parent). A comparison of Meiosis and Mitosis are discussed below.

In mitosis, the genetic material (DNA) of a cell is duplicated and divided equally between two cells. The dividing cell goes through an ordered series of events called the cell cycle. The mitotic cell cycle is initiated by the presence of certain growth factors or other signals that indicate that new cell production is needed. Somatic cells in the body replicate by mitosis. Examples of somatic cells include fat cells, blood cells, skin cells, or any cell in the body that is not a sex cell. Mitosis is necessary to replace dead cells, damaged cells, or cells that have a short lifespan.

Meiosis is the process by which gametes (sex cells) are generated in organisms that reproduce sexually. Gametes are produced in the male and female gonads and contain half the number of chromosomes as the original cell. New combinations of genes are introduced into a population through genetic recombination that occurs during meiosis. Thus, unlike the two genetically identical cells that are produced in mitosis, the meiotic cell cycle produces four cells that are genetically different.

Differences Between Mitosis and Meiosis 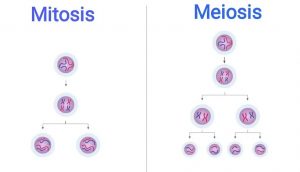 Similarities of Mitosis and Meiosis

While the processes of mitosis and meiosis contain a number of differences, they are also similar in many ways. Both processes have a growth period called interphase, in which a cell replicates its genetic material and organelles in preparation for division.

Both mitosis and meiosis involve phases: prophase, metaphase, anaphase, and telophase. Although in meiosis, a cell goes through these phases of the cell cycle twice. Both processes also involve the alignment of individual duplicated chromosomes, known as sister chromatids, along with the metaphase plate. This happens in the metaphase of mitosis and metaphase II of meiosis.

Furthermore, both mitosis and meiosis involve the separation of sister chromatids and the formation of daughter chromosomes. This event occurs in anaphase of mitosis and anaphase II of meiosis. Finally, both processes end with the division of the cytoplasm that produces the individual cells.

Large lot sizes are important factors to consider for assay manufactures to minimize costly pre-tests. BBI offers scalable production models to fit your assay needs. To learn more schedule a meeting with us at WRIB 2022 in Atlanta by using the link below:
https://bit.ly/3BTPu6u

Meet us at WRIB 2022 booth 54 to learn more about our antibodies against a wide range of targets, even those that differ by only a few amino acids such as anti-idiotypic antibodies. To schedule a meeting with us at WRIB, please click:
https://bit.ly/3djqMTM
#antibodyservices

The 16th WRIB conference in Atlanta, GA is getting closer, and BBI solutions will be there showcasing our range of MBS products! Will you be attending this year? If so, do not delay in booking a meeting with the MBS team on-site: https://bit.ly/3xmj3Ln