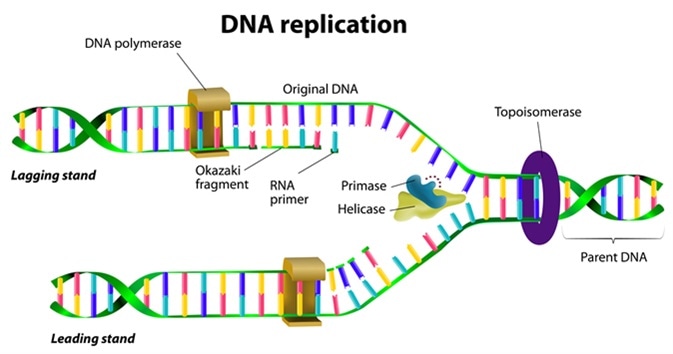 DNA replication, also known as semi-conservative replication, is the process by which DNA is duplicated. This is an important process that takes place within the dividing cell.

DNA is made up of millions of nucleotides. These are molecules made up of deoxyribose sugar, with phosphate and a base (or nucleobase) attached to it. These nucleotides are linked together in strands through phosphodiester bonds to form a “sugar-phosphate backbone”. The bond formed is between the third carbon atom of the deoxyribose sugar of one nucleotide (known as 3′) and the fifth carbon atom of another sugar in the next nucleotide (known as 5′).

There are two strands of DNA, running in opposite directions or antiparallel to each other. These strands are linked to each other along their entire length through the bases of each nucleotide. There are 4 different bases associated with DNA: cytosine, guanine, adenine, and thymine. In normal DNA strands, cytosine binds to guanine and adenine to thymine. When joined, the two strands form a double helix structure.

What is DNA replication?

DNA replication is the process by which DNA makes a copy of itself during cell division.

1. Is the first step in DNA replication to “unzip” the double helix structure of DNA molecules.

2. Is this carried out by an enzyme called helicase that breaks hydrogen bonds holding the complementary bases of DNA together (A with T, C with G).

3. The separation of the two single strands of DNA creates a ‘Y’ shape called a replication ‘fork’. The two separate strands will act as templates to make the new DNA strands. 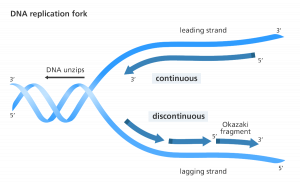 5. Once all the bases are paired (A with T, C with G), an enzyme called exonuclease removes the primers. The gaps where the primers were are filled with even more complementary nucleotides.

6. The new strand is checked to make sure there are no errors in the new DNA sequence.

9. After replication, the new DNA automatically coils into a double helix.

It has been great catching up with current customers and potential new partners at #PEGS2022. There is still time to meet our team at stand#206 to discuss your antibody development needs and to learn about our recent Biotez acquisition #antibodydevelopment

We are all setup on stand #206 at PEGS Boston. We’ll be here to discuss your antibody development and manufacturing needs and how a thorough development strategy can achieve not only your primary antibody goals, but also address your second priority goals
#AntibodyDevelopment

We’ll be on hand to discuss your antibody development needs and how a thorough development strategy can achieve not only your 1st, but also your 2nd and 3rd #AntibodyGoals. Please use the following link to schedule a meeting with our team on-site: https://bit.ly/3LlleUp

To learn more on the principles of RecoveryELISA and how it can help to optimize therapy click here to watch our video tutorial. https://bit.ly/3uWMItH